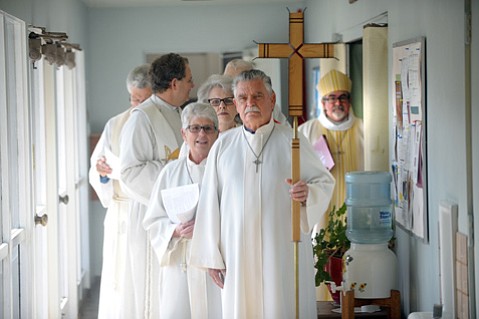 The Life, Death, and Resurrection of Grace Lutheran Church

The 113-year old Grace Lutheran Church in Santa Barbara, facing the inevitable after decades of declining membership, closed its doors forever last Sunday as a house of worship in the Lutheran faith, leaving its aging members, all 42 of them, unmoored but unshaken in their mission.

Since the 1970s, the A-frame church at 3869 State Street had always been a place where a homeless person could get a blanket and a meal. Now, to establish a more enduring legacy, the congregation is bequeathing all of its land to help the poor – two acres worth $7.5 million in a major shopping mall.

On one acre, the Housing Authority of the City of Santa Barbara plans to demolish the church and build Grace Village, a three-story structure with 60 rental apartments for low-income seniors, in accordance with the congregation’s last wishes. The remaining acre, which is under commercial lease, will generate more than $100,000 yearly to help house and feed the needy, church leaders said.

“The way they’re using their property is extraordinarily admirable,” said Rev. Mark Asman of Trinity Episcopal Church. “Numbers don’t always tell a story. I’d measure the size of their heart and say their heart is alive.”
Among Grace Lutheran members, the satisfaction of giving has been tempered by grief over the loss of a “church home.” They had been pondering their options for 10 years before voting last spring to proceed with closure.
“This is extremely painful and even a little divisive,” said Barbara Wagner, a church council member who first started attending services at Grace Lutheran in the late 1970s with her husband, Martin Scharlemann. “It wasn’t a smooth process. It’s hard to imagine not having that church in our lives. They are the sweetest, most determined-to-do-good people I’ve ever met.
“We’re going to enter a period of mourning – and then we’re going to look for a church that has lots of young people.”

Grace Lutheran’s founders held their first worship service in 1902 and bought a church on Anacapa Street in 1906. The current property was purchased for $200,000 in 1956 on a lemon orchard and dairy farm. But membership peaked at just under 200 in the 1960s and dropped steadily after that, church leaders said, mirroring a 40-year decline in mainline Protestantism across the country. Beginning with the Sixties rebellion, scholars say, many young Americans shifted to less traditional, more unscripted evangelical churches, or they dropped out of organized religion altogether. 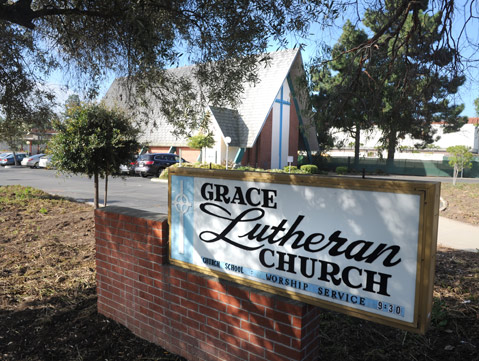 “Grace Lutheran is prototypical of the larger pattern,” said Wade Clark Roof, professor emeritus of religion and society at UCSB. “For a long time, mainline Protestant churches were a bridging institution, the center of the culture holding things together. But they were pushed aside. Old-style Protestants have been the ones who have suffered the most.”

Sunday’s closing service at Grace Lutheran was old-style in its formal hymns, scripted prayers and Bible readings, but the theme of the program, taken from Revelation, Chapter 21 of the Bible, was, “Behold, I am making all things new.” Organ music filled the spacious sanctuary, and the First Congregational Choir led the congregation and friends in song.

“This is not Grace Lutheran’s funeral, but its transformation, its metamorphosis into something new and good and life-giving,” Bishop R. Guy Erwin told the listeners, as many wiped away tears.

The land alone for Grace Village is worth $5.5 million and represents the largest private gift in the history of the Housing Authority, said Rob Pearson, executive director.

“I was very impressed when they wanted to make sure that their assets went to a use that would serve,” said Pearson, whose partner, Jon Glasoe, is a church member. There are presently 1,500 elderly residents on the waiting list for public housing in Santa Barbara, Pearson said.

The Housing Authority and Front Porch Communities, a nonprofit group based in Glendale, will build Grace Village. The project is under review by the city Architectural Board of Review, and construction on Grace Village is expected to begin in mid-2016. Until then, the church building will continue to function as a food pantry and a meeting space for non-profit groups. Templo Calvario will continue to hold services in Spanish there. In the meantime, the pipe organ and hand-hewn baptismal font will be donated to other Lutheran churches on the South Coast.

The remaining acre of Grade Lutheran’s land, under lease to Vons and AC4 Fitness will be owned and administered by California Lutheran Homes, said Pat Wheatley, the church council president. The funds generated by the lease, currently about $100,000 yearly, will go to Transition House, Habitat for Humanity, Lutheran World Relief, and a food pantry and other support services at Grace Village, she said.

Transition House was co-founded by Grace Lutheran, Trinity Episcopal, and a handful of other churches that took turns running monthly homeless shelters between 1984 and 1986 in their basements and fellowship halls. Rep. Lois Capps, a longtime member of Grace Lutheran, recalls working as a nighttime proctor and serving meals in those earlier days. The church volunteers were named as Local Heroes by this newspaper in 1987.

“It was a vibrant church,” Capps said. “But these are archaic forms, and it’s a new world now. You form new alliances and allegiances, and I believe that’s progress. There’s some sadness and poignancy in the closing, but it can be the sign of better things to come.”

Years ago, Grace Lutheran would distribute leaflets in nearby neighborhoods to try to recruit young families; and a few families did come, only to move away later. Wagner said she and her husband left Grace Lutheran temporarily so that their daughter could have a church life with friends. They returned as soon as they could, Wagner said, but by the time the choir disbanded two years ago, the handwriting was on the wall.

“Sometimes I was the only soprano, which is really bad news,” she said. “There were so few of us trying to keep it all afloat.”

It’s a familiar story. The Christian Century, a biweekly magazine based in Chicago, estimates that on an average day, nine churches in the U.S. close their doors for good. In the magazine’s January 7 issue under the headline, “The last Sunday,” a contributor advises pastors to “preach resurrection” and “be prepared for an increase in emotional tension after a church decides to close.”

According to Bishop Erwin, who represents the Southwest Synod of the Evangelical Lutheran Church in America, 40 out of 120 churches in the counties he oversees – Los Angeles, Kern, Ventura, Santa Barbara and San Luis Obispo – have congregations of fewer than 100 people. The greatest single factor in the decline, he said, “is the dying out of a generation of people who are very committed to church.”

Last week, several members of Grace Lutheran said they would spend some time grieving before choosing another church home. One woman, who had been attending since she was a child in the 1940s, objected to the publication of this article because, she said, “I’m not inclined to share our misery with the rest of the community.” Another longtime member regretted that he had failed to convince the congregation to move to a different location, using the lease revenues.

“There were six or seven of us who felt we shouldn’t stop, and we should hold on to the end,” he said.