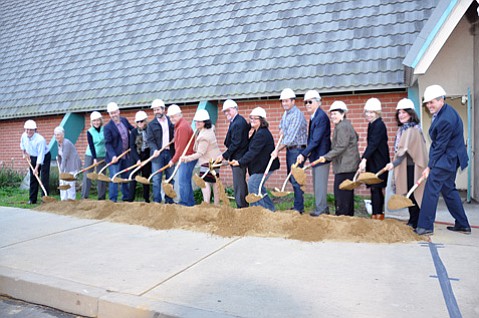 The groundbreaking ceremony for Grace Village on January 5 was attended by a phalanx of city officials and members of Grace Lutheran Church.

As gifts go, Grace Lutheran’s was amazingly large, and it benefits a portion of society that is both vulnerable and growing. Last February, the church’s congregation assembled for worship one last time in the A-frame building at 3869 State Street, having decided over the previous year to donate the property to the Housing Authority of the City of Santa Barbara for an affordable senior housing complex. The groundbreaking for the property, which is valued at $5.4 million, took place January 5, attended by a phalanx of city officials and members of Grace Lutheran Church.

The church was founded in 1903, and as has happened to so many churches, its congregation has dwindled to about 50 over the past decade from “aging in place,” as the church’s Pat Wheatley described it. The congregation also decided to donate its land under Vons at La Cumbre and the space in between, currently occupied by AC4 Fitness, to California Lutheran Homes. “The revenue from those leases will go into two funds,” she said, for “future subsidized senior housing in our community and to basic needs,” including Transition House — which Grace Lutheran helped found — Habitat for Humanity, and Doctors Without Walls.

“It was nothing short of extraordinary,” Wheatley said. “This congregation never waivered in their faith and belief in service … and in social ministry.” During the year church members spent looking into options — discussions that Lois Capps took a great interest in, having been a member for more than 40 years — they soon realized that the funding for low-income housing was incredibly intricate. They began to work with the Housing Authority for the City of Santa Barbara, which has built about a dozen senior complexes.

Of the approximately 6,000 people on the city’s housing wait list, said Skip Szymanski, Housing Authority’s chief operating officer, about a thousand are senior citizens. Grace Village, designed by Santa Barbara’s RRM Design Group, should join their ranks by the end of the year and offer 58 one-bedroom apartments. Built under the city’s AUD (average unit-size density) Program, the apartments will all be about 500 square feet in size. With only 16 parking spaces at the complex, preference will go to seniors without cars, he said. With streets regularly packed with cars, buses, stoplights, and people, the upper State Street and La Cumbre Road location is already a nexus for public transportation, retail, grocery stores, banks, and other necessities of life.

The property’s neighbors include The Marc, composed of 89 luxury apartments, and 85 apartments proposed for The Galleria space. At the three-story Grace Village, the tenant portion of the rent will go no higher that $474-$948, based on area median income, Szymanski outlined, and represents about 30-60 percent of the subsidized rent. Of the enormous wait list: “We’ll be setting up a list for Grace Village separately” in the coming months, he said.

Grace Lutheran has been a food distribution location for Foodbank of Santa Barbara County, Wheatley added, which has moved to Trinity Episcopal downtown during construction. It will return to Grace Village, and the church’s nearby community garden will also be restored, said Szymanski.

Of the project’s approximately $19 million cost, the city and Housing Authority chipped in $2.7 million, and the majority came from MUFG Union Bank as part of a federal tax credit program, and also the California Reinvestment Corp and several nonprofits, said Szymanski. The developers on the project are the Housing Authority and Front Porch Development, which is part of the nonprofit California Lutheran Homes. By the end of the creditors’ involvement in a couple of decades, the Housing Authority would have the option to purchase the property, which holds a low-income requirement for about a hundred years. Grace will indeed lead many home.